The nation’s favourite unhappily married 80s couple are back for a new season of the IFTA award winning comedy series on RTÉ2. Airing this Nov / Dec 2016. 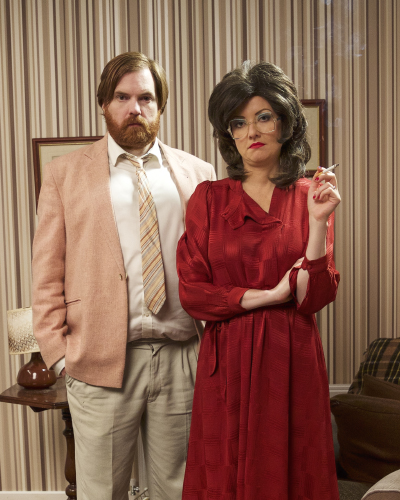 Bridget & Eamon are still stuck in the mid-midlands with their 6 to 8 kids with only cigarettes, alcohol and choppy changey hair to get them through it.

Over the 6 brand new episodes and a Christmas special, they’ll open a hair salon in the house, go to up Dublin to a fancy restaurant for the first time ever, lose their minds when they miss a phone call, run for election, solve a murder case, play a dangerous game of sunburn roulette, get a visit from the Mafia and maybe accidentally kill Eamon’s Mammy.

Jennifer Zamparelli and Bernard O’Shea again headline the show as the titular twosome and the other regulars from series 1 are all back with Norma Sheahan, Sharon Mannion and Eleanor Tiernan as neighbours Noreen, Concepta and Dolores. Edwin Sammon is back as Fr. Gabriel, Colum McDonnell as Fierce Handy Frank and with Neil Molloy and Danny Kehoe as hopeless Gardaí Paul and Ger.

They say you always marry your mother and it looks like Eamon has with Katherine Lynch as Eamon’s Mammy, all chain smoking, big glasses and choppy changey hair.

Produced and Directed by Jason Butler